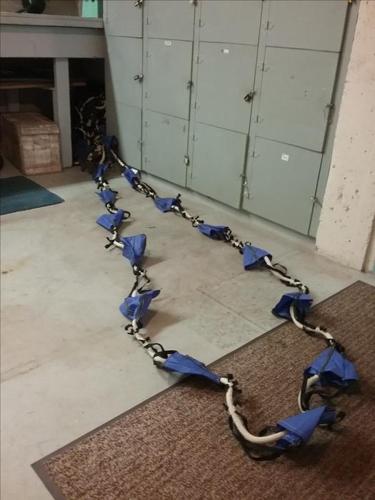 20 spare new cones
164 cones installed
-tail 100 feet 9/16" double braid nylon with 72 cones
-second section 110 feet ¾" diameter double braid nylon with 64 cones
-third section 40 feet 7/8" diameter double braid nylon with 28 cones
-leader 50 feet 7/8" diameter
Total length 300 feet
This Jordan series drogue with 164 cones I deployed 7 times in March in the South Indian Ocean during a 49 day passage between Kerguelen and Tasmania .
There is no doubt in my mind that the vessel and likely myself would not have survived this voyage without the drogue.
I am/was a singlehanded sailor and have developed several procedures for deploying, setting, and retrieving the series drogue (most I have not seen anywhere on the internet or on the instructions that came with cones).
I am creating a word document and it is my intention to share this information with anyone who may wish to deploy a series drogue.
Mr Jordan with his wonderful invention has given sailors such as myself (one circumnavigation including into the Antarctic Convergence as well as the Aleutians and the Bering Sea and two trans Pacific voyages again into the Aleutians and Bering Sea) a much higher probability of surviving singlehanded under very difficult conditions, and it is in this spirit that I am willing to share what I have learned.
I have been made aware of two 'professionally' pre-built series drogues made using Spectra line (easy to deploy and ship) that broke.
This is not too surprising to me as Mr Jordan made it clear that the combination of both stretch and strength, both characteristics of double braid nylon were required, thus my 'experienced' drogue is 100% double braid nylon and forms a pile about 3 feet high by 2 feet in diameter.
My vessel was a 39 foot steel cutter (Folkes 39) and displaced approximately 35,000 lbs.
The supplier Ocean Brake asks $8.24 US per cone and I have 164 on the drogue (approximately half new as they were replaced in Tasmania) and 20 new spares.
Thus 184 cones would cost $ US. (approx $ CDN)
90 feet 7/8" diameter double braid nylon $234 CDN
110 feet ¾" diameter double braid nylon $225 CDN
100 feet 9/16" diameter double braid nylon $122 CDN
Total new $ CDN
Sale price $500 CDN
Location Victoria, BC, Canada

Classifieds in: Nanaimo
Category: Boats
Copyright © 2020 usedboatsforyou.com, All Rights Reserved. Designated trademarks and brands are the property of their respective owners.
Home | Ads | About | Place an ad | Sitemap 2 | Popular searches 2 3 4 5 6 7 8